Androgenetic alopecia or commonly male pattern hair loss (MPHL) accounts for more than 95% of hair loss in men. By the age of thirty-five, 35% of all Hungarian men will experience some degree of appreciable hair loss and by the age of 50 approximately 50% of men have significantly thinning hair. Approximately twenty five percent of men who suffer with male pattern hair loss begin the painful process before they reach the age of twenty-one. Contrary to societal belief most men who suffer from male pattern hair loss are extremely unhappy with their situation and would do anything to change it. Hair loss affects every aspect of the hair loss sufferer’s life. It affects interpersonal relationships as well as the professional lives of those suffering. It is not uncommon for men to change their career paths because of their hair loss.

Androgenic alopecia or male pattern hair loss (MPHL) is responsible for the vast majority of hair loss in men. While there are many possible reasons people lose hair including serious disease, reaction to certain medications and in rare cases extremely stressful events, most hair loss is men can be blamed on heredity testosterone and age. What male pattern hair loss sufferers are actually inheriting are hair follicles with a genetic sensitivity to Dihydrotestosterone (DHT). Hair follicles that are sensitive to DHT begin to miniaturize, shortening the lifespan of each hair follicle affected. Eventually, these affected follicles stop producing cosmetically acceptable hair. This process of “Miniaturization” causes the terminal follicles to produce “Vellus” or baby hairs, that are fine, short and nonpigmented. Male pattern hair loss is generally characterized with the onset of a receding hairline and thinning crown. Hair in these areas including the temples and mid-anterior scalp appear to be the most sensitive to DHT. This pattern eventually progresses into more apparent baldness throughout the entire top of the scalp, leaving only a rim or “horseshoe” pattern of hair remaining in the more advanced stages of MPHL.

A CLOSER LOOK at DHT

Dihydrotestosterone (DHT) is a derivative or by-product of testosterone. Testosterone converts to DHT with the aid of the enzyme Type II 5-alpha-reductace, which is held in the hair follicle’s oil glands. While the entire genetic process of male pattern hair loss is not completely understood scientists do know that DHT shrinks hair follicles, and that when DHT is suppressed, hair follicles continue to thrive. Hair follicles that are sensitive to DHT must be exposed to the hormone for a prolonged period of time in order for the effected follicle to complete the miniaturization process.

Typical male pattern hair loss is usually diagnosed based on the appearance and pattern of the hair loss along with a detailed medical history, including questions about the prevalence of hair loss in the family. AtProHAIR Transplant Clinic, an experienced doctor examines the scalp under magnification with a device called a ‘Densitometer’, in order to assess the degree of miniaturization of the hair follicles. This assessment is very important when recommending the proper course of treatment. Some advertised “clinics” might recommend a costly hair analysis or a scalp biopsy to properly diagnose your hair loss. The only reason to have a hair analysis is to assess the possibility of poison induced hair loss. A hair analysis may reveal substances such as arsenic or lead, however, hair loss caused by poising does not present itself in a typical male pattern. You should avoid these clinics and seek the advice of a doctor from ProHAIR Transplant Clinic, who can properly examine you and help you treat your hair loss. When considering treatment for your hair loss, it is important to understand just how far your hair loss has progressed. There will be times when you will have to relay this information via telephone or the internet to physicians or practitioners you may be trying to receive information from. It is also important to guard yourself against misdiagnoses of your condition.

Note: There are many variants in pattern hair loss; these have been cited as the most typical. 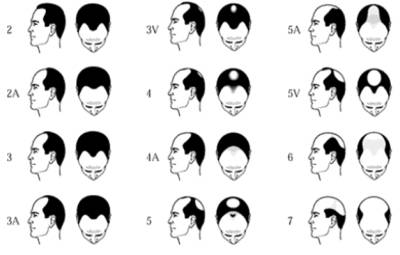 Two other types of genetic hair loss in men, as well as women, not often considered by doctors are, “Diffuse Patterned Alopecia” and “Diffuse Unpatterned Alopecia,” as they pose a significant challenge both in diagnosis and in patient management. Understanding these conditions is crucial to the evaluation of hair loss in both women and men, particularly those that are young when the diagnoses may be easily missed, as they may indicate that a patient is not a candidate for hair transplant surgery. Diffuse Patterned Alopecia (DPA) is an androgenetic alopecia manifested as diffuse thinning in the front, top and crown, with a stable permanent zone on the sides and in the back. In DPA, the entire top of the scalp gradually miniaturizes (thins) without passing through the typical Norwood stages. Diffuse Unpatterned Alopecia (DUPA) is also androgenetic, but lacks a stable permanent zone and affects men much less often than DPA. DUPA, found more in women then men, tends to advance faster than DPA and ends up in a horseshoe pattern resembling the Norwood class VII. However, unlike the Norwood VII, the DUPA horseshoe can look almost transparent due to the low density of the back and sides. Differentiating between DPA and DUPA is very important because DPA patients often make good hair transplant candidates, whereas DUPA patients almost never do, as they eventually have extensive hair loss without a stable zone for harvesting. The progression of male hair loss in Diffuse Patterned Alopecia (DPA) and Diffuse Unpatterned Alopecia (DUPA). In DUPA, the sides thin significantly as well. 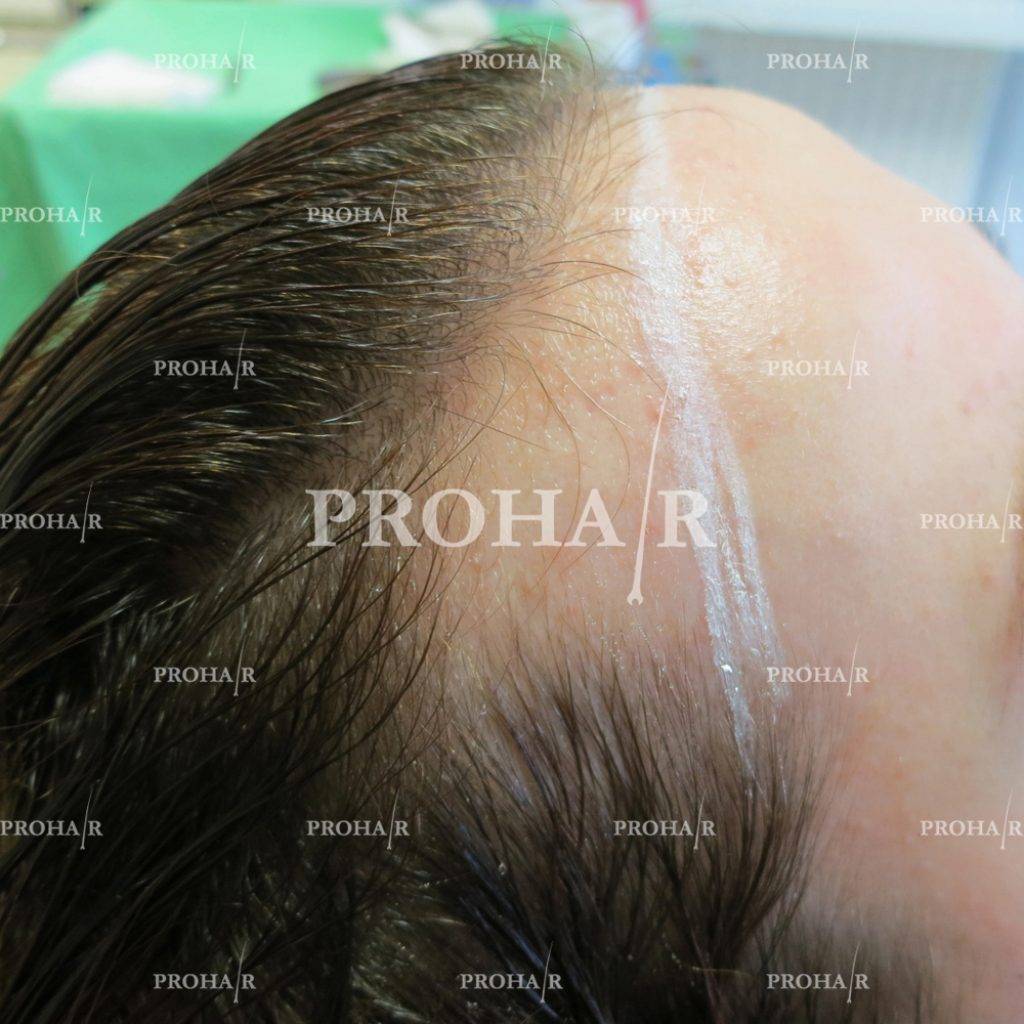 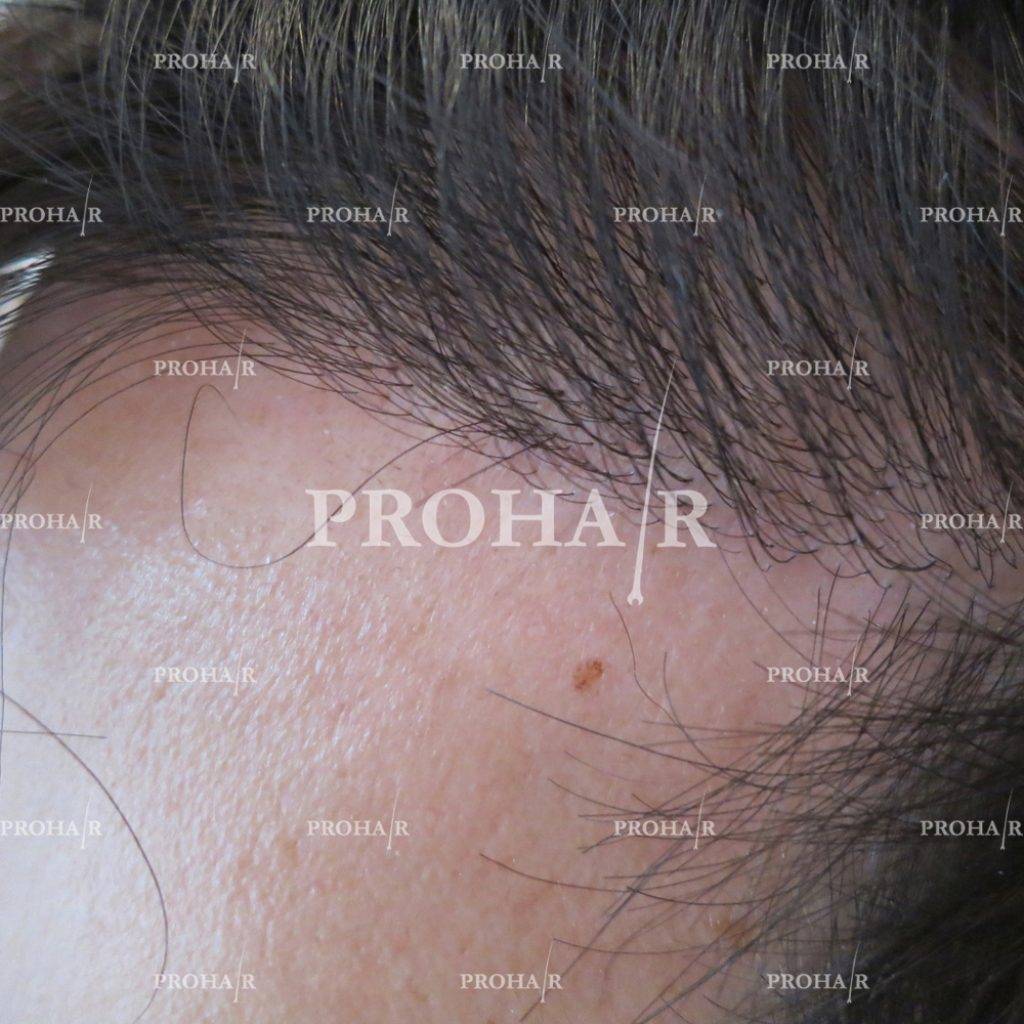 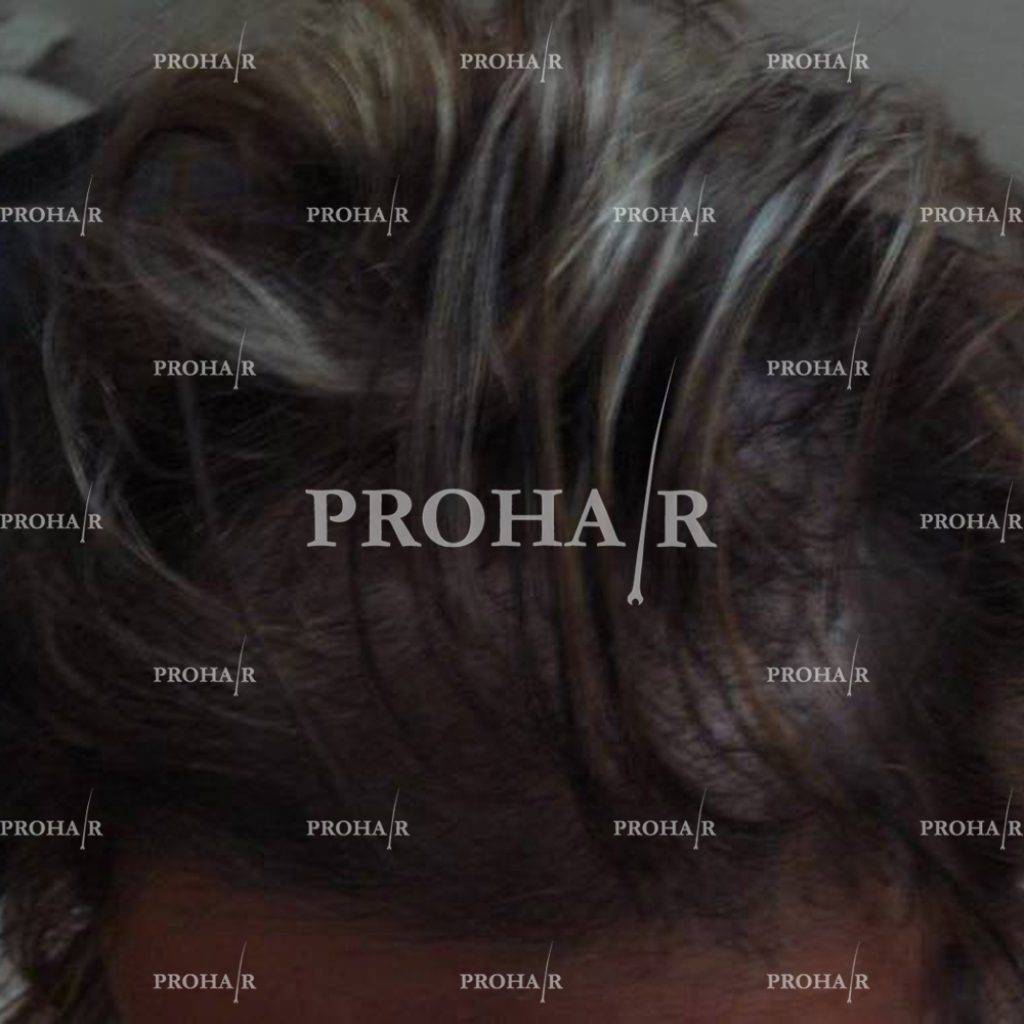